What do you prefer pies or chocolate bars?

Last time we were exploring risk factors of having a coronary heart disease with the help of Flexmonster Pivot Table Component. In the process, we had been using a flat table, pivot table, and charts above all. This time, we will talk about using pie charts and bar charts for different purposes.
Selecting a type of chart depends primarily on what sort of data you have, at what stage of your analysis you are, and what message you want to convey. Generally, charts and graphs are used for one of the following purposes:

Let us start from pie chart as one of old-fashioned chart type we can see everywhere, in the news, in business reports, and many other places. Although pie chart faces a lot of criticism lately when used properly it can be beneficial owing to its intrinsic simplicity and visibility. The pie chart is a good way to show relative sizes as an area of each slice is proportional to the quantity it represents. The earliest known pie chart is associated with William Playfair’s Statistical Breviary of 1801. We had mentioned William Playfair’s significant impact on evolving data visualisation techniques earlier in our blog. Below you can see pie charts example made by him more than two centuries ago. 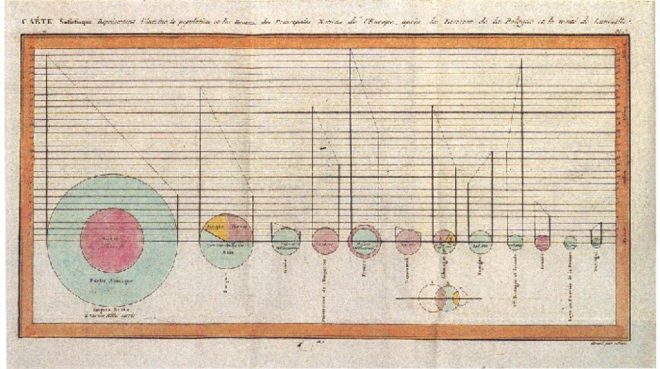 The most common flaw exhibited by pie charts is that they can not display data which have with a lot of variables in it. Such data onto the pie chart view is merely unreadable. In one of our latest blogs, we had already discussed key ideas of the qualitative data visualisation so do not fall into this trap. In addition to problems occurring from using too many categories, another big issue is holding the basic background principle: that the pie slices sum up to a meaningful whole. One of the possible decisions is doing pre-visualisation work such as re-grouping your information. Also, Flexmonster Pivot Table Component allows you to create pie charts from pivot tables which help to avoid promiscuity too.

Probably when pie charts started to look boring as a refresh a lot of variations had evolved such as 3D pie charts, doughnut charts, sunburst charts, pizza charts, etc. Yet it is important to stay careful as composite visualisations can produce distortions in perceptions more easily.

For displaying percentage or proportional data bar charts are widely used too. Actually, a lot of analysts favour bar charts more than pie charts as there is a conception that judgments of an area are less accurate than judgments of length. For a small data, it is common practice to use tables. Frequently, bar graphs or charts provide a clear presentation of categorical data. Categorical data is a clustering of data into discrete groups, such as years, countries, age groups, etc. Another possible representation is stacked bar chart that represents different groups on top of each other. The height of the resulting bar is the combined result of the groups. Evidently, bar charts are handier than pie charts for plenty of analytical targets.

But what does the science of cognitive psychology tell on the topic? In a paper from 1991, Ian Spence and Stephan Lewandowsky executed a number of experiments comparing pie charts to a horizontal stacked bar chart, a regular bar chart, and a table of numbers. They concluded that there is a little to choose between bar charts and pie charts. However, in a situation when the reader has to compare combinations of proportions pie chart shows better results. Not surprisingly, a table does not do well since to add numbers is harder than to combine areas. Thus, if we give ground on accuracy in reading numbers, some complex tasks can be easier embodied with the pie chart. The bar chart is great for seeing and comparing numbers, but when it comes to summing up bars, it’s much less effective.

In our next blog, we will explore lines, scatter plots for varied applications such as displaying time series, trends, and relationships. Sounds interesting, doesn’t it?